I’m revamping my covers here lately and I cannot wait to show you the NEW covers for two more of my books.

These are reader favorites and I know y’all will love their new looks.

Than you to Megan Parkers / EmCat Designs for the updated looks.

Without further adieu, here we go:

Behind My Charade, A Legacy Falls Romance 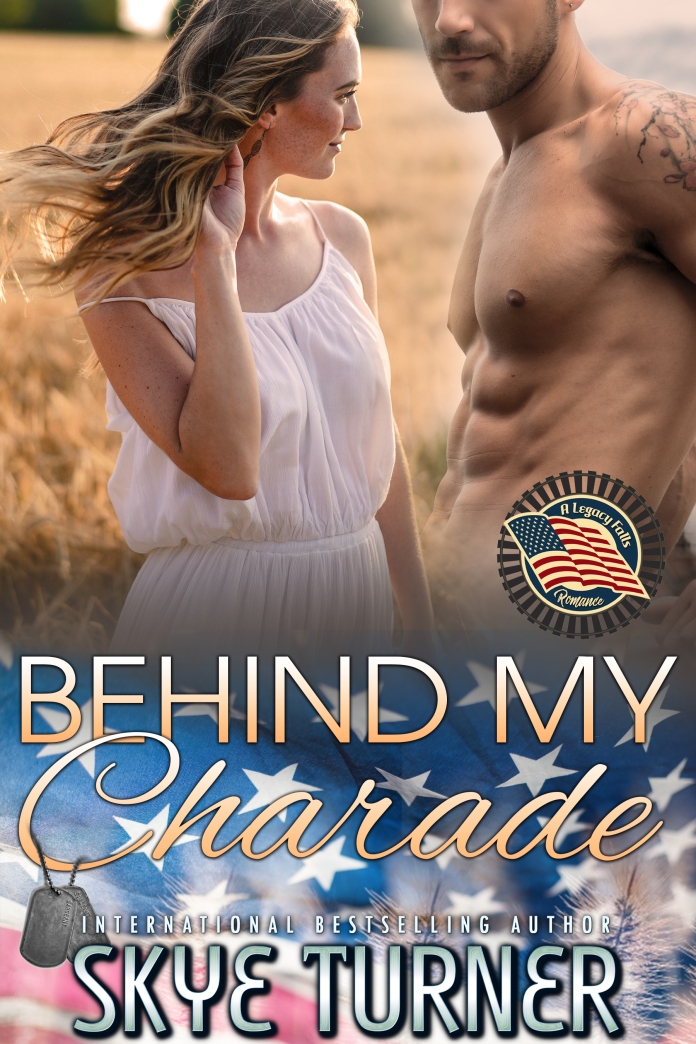 ❤🌾
Behind My Charade Blurb:

Army Staff Sergeant Bethanie Reynolds comes home to Legacy Falls a broken woman. As the only survivor from an attack on her squad, she wants nothing more than to hide away in her grandmother’s tiny house and attempt to find a hint of normalcy.
Remy LeSalle owns the sprawling farm next door to Bethanie. For six years, he’s tried to forget the woman who stole his heart as a child, but never gave them a chance, and instead chose to serve her country.
Only now… she’s back.
He sees the front she presents to the town and everyone they know, but he knows she’s hiding something.
Can Bethanie overcome her survivor’s guilt and finally let Remy love her? Will his love be enough to break through her walls?
They say time heals all wounds, but is the love of a good man enough to allow one broken woman to release the charade?
***This book contains adult language and explicit sex scenes. It is not intended for those under the age of 18.
***This book contains military situations that some readers may find hard to handle. Reader Discretion is advised.

“5 Stars
An Emotionally Charged Read
“An emotional charged story of how love can lead to redemption from the demons of war. Skye Turner does a great job of giving the reader exactly what they need to feel the pain Luka most go through to realize that what he needs most to help his broken wounded soul has been right in front of him along. Rea’s battle to bring Luka back to the man he was before the mission is a great example of the type of love everyone searches for but some never get a chance to find. The Chemistry between the two is that slow burn that is always right there under the surface no matter where they are or who else happens to be around. I really enjoyed the emotional journey that Rea and Luka take us on to Battle to bring Luka back from the brink . looking forward to the next stories in the series.”

Behind My Charade (Military Romance. Remy and Bethanie)
A Legacy Falls Romance
Amazon

Jase Stevens has a life and career that are heading in one direction… up. His career as the pitcher for the Baton Rouge Gris Gris, the baseball farm team, is garnering him national attention as a major league contract seems to be rapidly approaching. His love life is also not lacking. His devilish good looks and southern charm have women flocking to him both on and off the baseball diamond.
Cally Cooper loves her life and takes pride in the fact that she helps animals that otherwise might be lost due to irresponsible owners and neglect. She runs Love & Paws, a non-profit, no-kill animal rescue center. The animals fill her life with purpose and her heart with love, though lately she finds herself yearning for the love of a good man as well.
After one night of celebration, Jase is arrested and charged with a DUI. Community Service at the Love & Paw’s animal rescue center is part of his sentence.
Neither Cally nor Jase are happy about the situation, but neither have a choice in the matter.
Both have preconceived ideas of what the other is like, but as they spend more time together, a spark of attraction takes them by storm. Will they realize that maybe they misjudged each other?
When two people find something they didn’t know they needed, will they embrace it or run from it?
Are they willing to take a chance on love or will the idea of opening yourself up to something you never expected have them both running from Rookie Love?
***This book is intended for those 18 and older. It contains graphic language and adult content. Those against those things should NOT read!

“Perfection. The perfect balance of romance and story to entrance every reader.” J. Ross, WSJ, USA Today, and NYT Bestselling Author
“Not your average baseball story. It will have you swooning one minute and hot and bothered the next.” H. D’Agostino, Author

“5 Stars
Homerun from Skye Turner
Rookie Love by Skye Turner, such a great little book! I was impressed, being this was my first read from Skye, but nonetheless so happy with the way Rookie Love turned out. Skye does a great service to readers by putting the character’s inner dialogue in italics, and making it so funny and snarky, that I looked forward to whatever Cally and Jase had to say.
The chemistry was instant, but still not as rushed as some I’ve seen, and I liked that they were still able to have some ‘get to know each other’ time before hitting the sheets. The bedroom scenes were hot, and well written, another great factor from Skye that I liked. The romance progressed at a great stage and everything about their relationship was believable.
I did like how the beginning, with Jase getting community service, wasn’t glossed over, making his character ever more real to me. And I liked how Cally was snarky and almost mean to him at the beginning, it showed that sometimes characters do act like real life people. It also was cute how she turned things around and begin to fall into lust, then love with him.
Skye writes with heart and heat! Jase and Cally’s relationship burned from the pages, they spark immediately but still retain that innate, real vibe that pulls you in! Rookie Love was an amazing little jewel of a book!”

What do you think of the new covers?