Yesterday was my 34th birthday. It started off not all that great with a morning message that followed me throughout the day. However, my 2nd book will be out January 3, 2014 and the cover reveal was  yesterday!

Over 70 blogs and FB pages posted my Reveal and it was shared, tweeted, and reposted over and over and over. Most people are loving the cover and I am completely in love with it. It’s perfect for the book.

I also received an abundance of birthday wishes and just feel so loved. For that I thank you.

The models I chose with my Cover Designer (Cover to Cover Designs) are freaking perfect and for the most part, the readers love them.

I will say this though… with self publishing books, as with everything else, do your research. For all aspects. Don’t go off of people you knows recommendations. Make sure you see the work they’ve done for other people, but more importantly, get references! Talk to other people who’ve worked with them who don’t know you and who have no agenda. This goes for photography, editing, cover design, formatting, etc… VERY important! 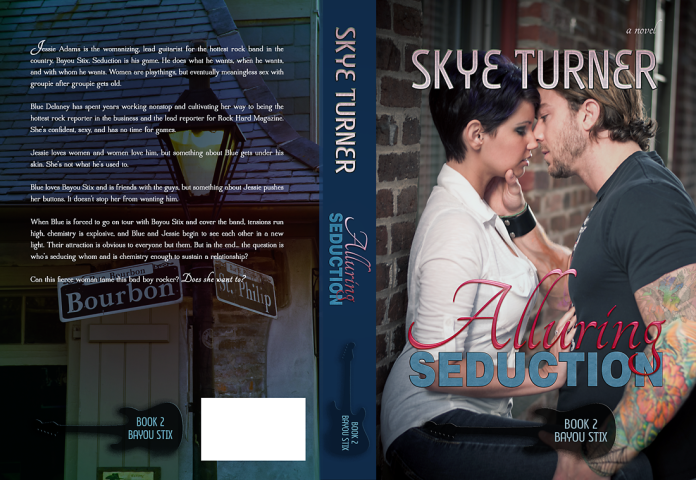 Blurb:
Warning: This book contains explicit language and explosive sex. It is an adult romance and not intended for anyone under the age of 18.
Jessie Adams is the womanizing, lead guitarist for the hottest rock band in the country, Bayou Stix. Seduction is his game. He does what he wants, when he wants, and with whom he wants. Women are playthings, but eventually meaningless sex with groupie after groupie gets old.
Blue Delaney has spent years working nonstop and cultivating her way to being the hottest rock reporter in the business and the lead reporter for Rock Hard Magazine. She’s confident, sexy, and has no time for games.
Jessie loves women and women love him, but something about Blue gets under his skin. She’s not what he’s used to.
Blue loves Bayou Stix and is friends with the guys, but something about Jessie pushes her buttons. It doesn’t stop her from wanting him.
When Blue is forced to go on tour with Bayou Stix and cover the band, tensions run high, chemistry is explosive, and Blue and Jessie begin to see each other in a new light.
Their attraction is obvious to everyone but them. But in the end… the question is who’s seducing whom and is chemistry enough to sustain a relationship?
Can this fierce woman tame this bad boy rocker? Does she want to?

Thank you Cover to Cover Designs for the amazing cover.
K Keeton Designs for the Cover Photography and Kendra Malcom – Model and Matthew Samson for portraying Jessie and Blue so fabulously!

How about a tiny little excerpt?
“I’m walking down the hall to my suite and I see Jessie’s suite door fly open and some disheveled blonde skank stomps out. She’s screaming into the room that he’s a “fucking asswipe” with her shoes in her hand, flipping him the bird with the other hand, and her hair is a mess. Classy.
She marches past me, jostling me with her shoulder, and never even spares me a glance. Stupid bitch. “Excuse you! Watch where you’re going!” Then, shaking my head, I mutter, “Bitch!”
My room is two doors down from his, so I have to walk past it. The door apparently didn’t latch from her “graceful exit” and is still open. My eyes stray to the inside of the room as I reach it. They widen as I take in the mess. Sheets and clothes are everywhere. Things are knocked over and, holy shit… is that a bra hanging from the light?
I can’t help but notice Jessie with his back to the door. He’s on the phone as he strips the bed and throws everything to the floor. He’s wearing nothing but a pair of low riding boxer briefs and I can clearly see his muscled, tattooed back. The colorful artwork on his arms ripples as he removes the sheets. His shoulder length blond hair is messy. Like someone, the skank I’m sure, has been running their hands through it.
I think I gasp. I hate that he gets my blood pumping and not just because he pisses me off! He hears me, and whips his head around. Shit!
His sky blue eyes meet mine and I can see he’s pulling on his lip ring with his teeth. His eyebrow raises and he smirks at my expression. I hurriedly school it as he strolls to the door. He stops right in front of me and leans against the doorjamb. “Really, Blue? Spying on me?” he says with disdain.”
Get your copy, only on AMAZON for e-books, Friday, January 3, 2014!

2 thoughts on “Alluring Seduction COVER REVEAL and my 34th birthday.”